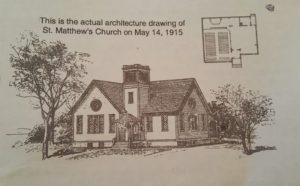 A summary of the History of St. Matthew’s Evangelical Lutheran Church on the 100th Anniversary (based on the complete history written by Margaret Meise Heavey). 1st Corinthians 3:6 says “I, Paul planted the seed, Apollo watered it but God made it grow.” So it was 100 years ago when St. Matthew’s Evangelical Lutheran Church was begun. The seed was sown by Adolph Duncker in the old Ostrander house on Richmond Road.

On September 1,1915 the Reverend John Volk, a missionary pastor introduced to the assembly. He gave his sermon in German and Reverend John Borth of St. John’s Lutheran Church repeated it in English. It was Pastor Borth who suggested to Mr. Dunker that starting a Lutheran Church on the south shore was wise since travel across the island was so difficult.

The proposed church was to be called the German-English Evangelical Lutheran St. Matthews Church, later anti German feeling ran high in the days during and after World War I. In this hose, one room was used as a Sunday School room and one hour later for Church Services. Services were held there until a chapel could be erected at Atler Park, Dongan Hills.Some of our more mature members might remember some of the first Sunday School members – Marion McKittrick DeMartini, Irene Alter Schweizer and Margaret eise Heavey. The Missouri Synod Mission Board was contacted in 1915 and they replied that if enough people could buy land, they would supply the mortgage. Thanks to God’s grace, a young Pastor Rev. Hugo H. Burgdork was available for the newly proposed church. It was also decided to purchase three lots on the Altar Estate on Alter Avenue and the corner of Jefferson Street for $400.  German families were invited to join and support the new church and George Hoverkamp received the contract to build the church and a mortgage of $4900 was granted. The cornerstone was laid on December 5, 1915. On Ma 14, 1916 the church was dedicated. Two services were held each Sunday. One in English and one in German. Because the unpopularity of anything German, the German Service was discontinued at the same time the church name was changed. Two more lots adjoining the church was bought for $700 and the parsonage was build on them.

On March of 1920 the Reverend Walter E. Holls was called to be our Pastor. St. Matthew’s continued to grow slowly in attendance, until the 1930’s when the depression hit our nation. Church attendance dropped off severely and as a result  contributions did also. But we survived, even though a fire destroyed our steeple in 1920’s. Hence we use electric candles on the alter by order of the fire department and we pray firemen never attend our Christmas Eve Candlelight Service! During the next ten years Pastor Holls often went without a salary. Pastor Holls said “were it not for the Grace of God and the help of the Ladies Aid Society, our church would no longer be here.” Pastor Holls was our Pastor for 52 years. He preached his last sermon on August 28, 1973 and went to Life Eternal that evening. Through the years the Lord has continued to bless St. Matthew’s with Pastors, Organists, Congregational Presidents, Ladies Aid members, Sunday School teachers and faithful members.

We especially remember Arnold Thompson and Fred Wrage who kept our church alive during some of our leanest years. Now we are blessed to have Reverend Philip Saywrayne as our leader to help us grow and flourish as the Lord’s Light in Dongan Hills. To God Be the Glory! Amen.